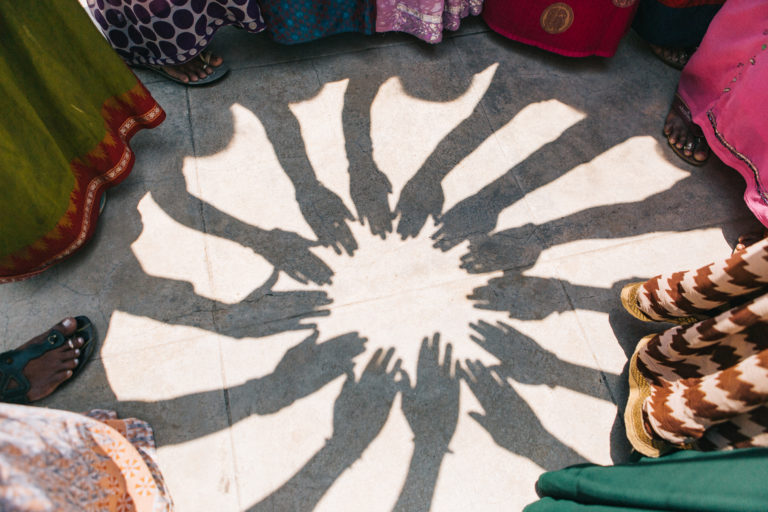 Throughout history, particularly the history of social justice movements, it has been proved time and again that there is strength in coming together. There is power in uniting and fighting together for a better future with one voice or one vision. However, this can easily be forgotten and it is often the most marginalised and vulnerable communities (who have the most to fight for) who feel they are invisible, their voices unheard. Although sex work is technically legal in India, several aspects of the work, such as soliciting, are criminalised, and female sex workers are still heavily stigmatised in society. This creates a culture of silence around sex work, where women in sex work (WSW) feel they cannot raise their issues for fear of discrimination or, at worst, further abuse.

The Taaras coalition aims to break this silence by creating a nation-wide platform for women in sex work, where they can raise their voices and advocate for their rights as citizens of India. "Taaras" means rapid progress in Sanskrit, and rapid progress is exactly what’s needed to improve the lives of female sex workers.

When I visited Tamil Nadu to meet Taaras leaders from across the state, I was overwhelmed by the magnitude of the problems faced by female sex workers in their day-to-day lives. Health problems (particularly HIV and other sexual health issues), partner abuse, financial instability, and police violence are all common issues faced by community members. These issues are compounded by stigma and discrimination from the police and government officials, as women in sex work are often reluctant to report crimes against them (such as theft or abuse), and are unable to access government schemes and services that would help them.

Taaras works by bringing together the leaders of district-level community based organisations (CBOs) of women in sex work at a regional, state and national level. At Taaras meetings, leaders share the problems faced by their communities, and work together to prioritise and solve key issues. A leader from Tiruppur described how things had changed since Taaras began in 2016: “Before Taaras, if we had any issues, only the particular CBO would address it. Now if we have any issue, all the Taaras members help to resolve it.  Earlier we had  fear.  Now we have confidence, we have strength.”

Taaras leaders have been using the power of the coalition to gain the respect of key stakeholders (such as healthcare workers, police, government officials and legal aid providers), and to educate them about the sex worker community. A leader from Dindigul told me about how, through Taaras, she was able to build a relationship with the district collector of the police: “Earlier, they’d ask, 'Why are you coming here? You are a sex worker.' Now they ask ‘What help do you want?’”

But I think the most remarkable story I heard about the power of Taaras was from Tiruppur district where the Taaras leaders described how they had managed to change the perspective of a government doctor who initially refused to treat four sex workers who came to his hospital. The leaders shared that the doctor would refuse treatment by saying things like  "Come another day" ,  "I have no time."  "We immediately informed the collector office and the District Aids Prevention and Control Unit about this ”, said a Taaras leader. Later, the Taaras leaders spoke to a senior officer who immediately called the doctor to meet the Taaras leaders  to listen to their issues. “The doctor understood the issue and apologised. Now he tells us when it's time to take our medicines from the hospital. Because he reminds us, our people visit the general hospital to take treatment on time.”

Members share their thoughts at a Taaras coalition meeting[/caption]

The leaders in Tamil Nadu are passionate about the Taaras coalition, and have been making incredible efforts to help it succeed. One leader described how they cope with travel expenses:“We earn from flower making. I make 500 rupees per day. Out of this 500, I spend on food, tea, house rent, phone bill etc.  And I save some money for Taaras travel.”

The leaders have big plans for Taaras. To begin with, they want all community members and stakeholders to know about the coalition. “In the government, the private sector and public sector, only some people know about Taaras. So we need to increase the Taaras coalition activity to include more departments, more stakeholders. We will reach all of them”,  a leader from Dindigul explained. Leaders from Tiruppur want to bring Taaras into the sphere of politics, and contest in local elections to bring sex worker issues to the forefront. While Taaras has been working well on a regional level,and the leaders want to build its presence at the state and national level too.

Having seen what the Taaras coalition has achieved within its first 18 months of operation, and knowing the drive and passion of the leaders behind it, I’m inclined to agree.

Click on one of our
Blog Categories to explore our approach and initiatives in more detail.

Life Skills For All

Prevention Of Gender Based Violence